Abuse of Autonomy: Paternalism in Politics

We all begin our journey on this earth as a blank canvas: a clean slate void of corruption, fear, or opinion. With a palette comprised of circumstance and choice, our lives and thoughts are painted as we age. Vibrant colors and crisp lines replace white space and blurred edges. Ideally, knowledge supersedes uncertainty; with the passage of time, the genre of our worldview is revealed to us. The term worldview will be used herein to refer to a system of beliefs that are interconnected, much like the pieces of a jigsaw puzzle (DeWitt 2010). When something in our external environment happens that does not coalesce with our value system—especially if the specific belief in question is central to our worldview—we have a few options, namely: remain in a state of uncomfortable cognitive dissonance, or take action to change the offending external event. In the United States, and certainly in the socially conservative state of Texas, it is unlikely that few issues cause as much dissonance or call to action as the matter of abortion.

For over thirty years, catalyzed by the controversial Roe v. Wade decision, the abortion debate has grown exponentially (Annas 2010). Pro-life collaborations rise up against clinics, physicians, and organizations that support abortion. These groups, empowered by their worldviews, act with certainty of residing on the absolute moral high ground. And yet, even in the historically conservative south, there remains a strong vein of support for the pro-choice movement. One of the core beliefs of these groups may be summarized in this way: “the right to an abortion may be a matter of standing law, but its legal underpinnings are being hacked away at an alarming rate, so that many women in this country, particularly the young and the poor, are having to resort to desperate measures we never thought we would see again… In many ways, we are back to where we were then, with a two-tiered system: women who have the means to travel to get a safe abortion could do so, and the others suffered illegal, unsafe abortions or unplanned pregnancies (Feldt 2013).” The recent passage of controversial abortion legislation in the state of Texas has made this speculation on unintended consequences a tangible possibility. Texas HB 2 (previously SB 5) stipulates, among other things, that abortion should be banned after twenty weeks gestation and that centers performing them meet the same requirements as ambulatory surgical centers. Proponents of this legislation have cited protection of fetal life and protection of maternal health as the motivation for the change that will inevitably result from this law. On the surface, these seem to be respectable claims. However, a thorough deconstruction of the stock issues and rhetoric here will expose this bill for what it is: infeasible, ripe with a plethora of negative consequences, and a very thinly veiled endorsement of paternalism.

The literature is very clear on the bioethical connotations of paternalism. This insidious concept can best be described as the limitation of the autonomy of another exclusively on the grounds of benefit to the person in question (Tong 2007). Respect for patient autonomy is broadly understood as recognition that patients have the authority to make decisions about their own health care, and is pervasive in bioethics literature (Sherwin 1998). On a more intimate level, it can even be said to underlie the basis of human dignity (Gaylin 1994). While a pragmatic approach to bioethics suggests removing autonomy from the forefront of the gold standard of care (Childress & Fletcher 1994), abortion is one arena where the implications of overriding autonomy are far-reaching and dangerous. The reasoning was succinctly explained by beloved Justice Harry A. Blackmun regarding his stance on Roe v. Wade: “Few decisions are more personal and intimate, more properly private, or more basic to individual dignity and autonomy, than a woman’s decision… whether to end her pregnancy (Flavin 2009).” Legislative interjection in this arena not only carries negative connotations for the state of women’s health; it carries negative connotations for the state of women’s rights (Orentlicher 2011). In a dynamic and ever-evolving society, we must be aware of the dangers of enlightened paternalism: dogmatic habits that do not adequately account for the changing environment and culture and misunderstand the place of intelligence and community in medical encounters (McGee 1999). To this end, even the most pragmatic interpretation of bioethical literature does not excuse the actions of the Texas legislature. Whatever the justification, talk of protecting women from harm caused by their own decisions is a marked recapitulation of paternalistic stereotypes, and in direct conflict with modern egalitarian ideals (Suk 2010). 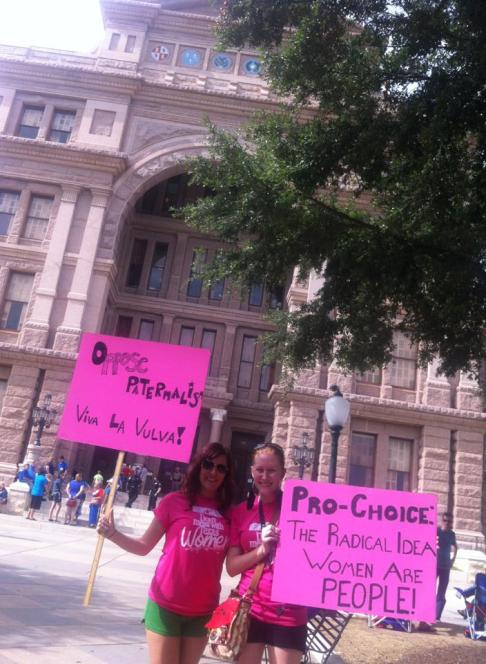 Rally at the Texas Capital, July 2013

A thorough investigation of case construction, stock issues, and bioethical principles is likely to support this unpleasant truth: the actions of the Texas Legislature are wholly unethical. To some degree, politics has no place in the exam room. The doctor-patient relationship is a sacred one, and lawmakers affecting the inner workings of clinics makes about as much sense as doctors sitting on the bench to issue judgments and penalties. All educated individuals have a scope of practice: a skeleton system of acquired knowledge and vales. This is fleshed out over the years with experience and blossoms into expertise, much as a canvas transforms into a painting. The sprawling masterpieces that adorn the Sistine Chapel were certainly not painted in a day, or even a week. How can it possibly make sense that merely days of debate and a limited understanding of fundamental principles of bioethics are deemed sufficient to make such important decisions regarding women’s rights? Passionate ideology and moral empowerment do not a good decision make. The same principle that governs distributive justice can be slightly altered and employed here: from each according to expertise, to each according to need. In such a strange and volatile time in our world, it seems prudent that lawmakers stay within their jurisdiction: they belong in our courtrooms, not our clinics.

Feldt, G. (2013). Crow after Roe: How Separate but Equal has Become the New Standard in Women’s Health and how We Can Change That. Brooklyn, NY: IG Publishing, Inc.